Right – it’s time to kick this blog back into life. Let’s start with the following, which I've cribbed from the front page of the Camp for Climate Action website (and updated a little bit), and which pretty well sums up my feelings about the whole, extraordinary, glorious event: 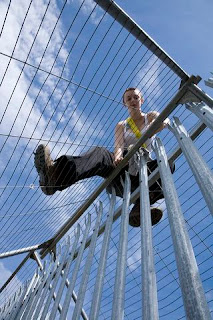 We Really Did It – And We’ll Be Back

It’s easy to feel powerless in the face of huge institutions such as energy corporations and governments. But the Climate Camp has shown that we don’t have to feel that way. On that August weekend, we proved our power.

We have now learned that - despite E.ON’s bluster that the power station had been running normally all weekend – we most definitely succeeded in disrupting its operations. We learned this from a most unlikely source: the police.

On Saturday 9th August, four bold rebel rafters got very close to the power station water intake pipe before being boarded and captured. They were arrested and charged with aggravated trespass and, according to their charge sheets, “they did an act, namely disrupting the running of the power station by causing the water inlet cooling system to be shut down.” That doesn’t sound like E.ON’s claim of “business as usual” to us!

Despite the fact that we had publicly announced what we were going to do months in advance; despite E.ON spending millions on extra security, and the Government spending millions on policing; despite the extra fences, the smear campaigns, the scare stories, and the most repressive and heavy-handed policing of peaceful protest for many years; despite all of this, we got over the fences, disrupted the power station, and massively embarrassed an international energy giant. We outsmarted 26 police forces to run the biggest climate camp ever. We covered the river in boats, filled the streets with people, covered the power station gates with banners and hit eleven other targets with autonomous actions. We flooded the national, local and independent media with our stories and messages. E.ON and the Government threw everything they could at us, and they still couldn’t hold us back.

We’re just ordinary people with a cause. And we proved our power – not just to the outside world, but to ourselves. Now we know what we can do, and our movement is stronger than ever. If the Government gives Kingsnorth the go-ahead, we will be back to stop it.

Why not join us? The Camp for Climate Action is an open and welcoming network with a group near you. Check out the “Local Groups” page to find out more!