I'm being sued for £5 million by an energy giant

You may remember that back at the end of October, I was one of sixteen people who occupied a power station chimney for a week, in protest at the Government's proposed massive expansion of gas power. While I was up there, I wrote and performed this poem. There's an awesome video of the action on the Guardian website - check it out.

Last week, the sixteen of us were in court, along with five other people who had entered the power station but not climbed the chimney. All twenty-one of us pleaded guilty to Aggravated Trespass, and are due to be sentenced on March 20th and April 2nd*. However, the company who run the power station - the French energy giant EDF - seem to think that this isn't punishment enough for us, and have started the process of suing us for an estimated £5 million in supposed "lost earnings".

Now, I've done some badly paid gigs in my time, but if EDF win then this one is going to be hard to beat. 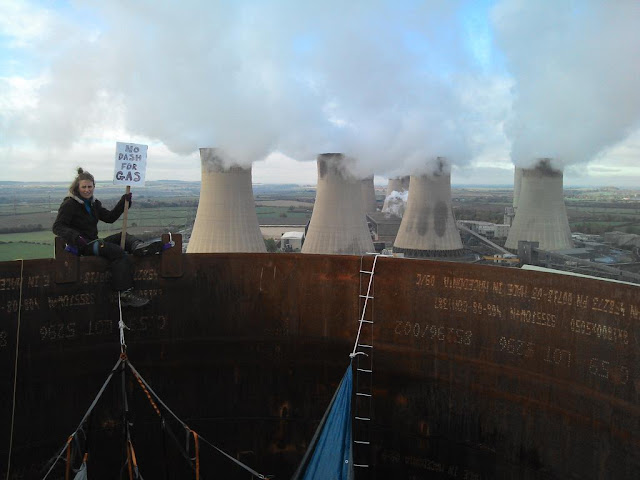 Obviously, we don't have £5 million. Despite our glamorous lives as performance poets, community volunteers and charity workers, we're never going to earn that kind of cash. That means that if EDF's (un)civil claim is successful, we stand to lose our homes plus any savings we might have, and then either declare bankruptcy or be in hock to a power company for the rest of our lives.

So we can't let them win. This is about much more than just the 21 of us - it's about the freedom to protest. If campaigners can be slapped with lawsuits every time they take part in civil disobedience, then that will make it much more difficult for people to stand up and be counted on the issues that matter.

Luckily, the backlash against Greedy-F's repressive tactics has already begun - since we announced the lawsuit on Wednesday, we've appeared on Channel 4 News, the Guardian, Radio 2's Jeremy Vine show, the Telegraph, the Independent, and lots of other blogs and magazines. A petition launched on Friday night already has more than 37,000 signatures, and is still rocketing upwards. We've had support from NGOs and big Twitter hitters like Naomi Klein and Richard Dawkins, and George Monbiot wrote a powerful article in support of us. EDF's Facebook page is now a hilarious delight to behold, plastered with sarcastic messages and customers pledging to switch suppliers.

It's all great, but it probably isn't enough, not yet. We need to make this into such a massive PR disaster for EDF that they drop this like a hot uranium rod (oh yeah, they're big into nuclear as well as coal and gas). If you want to help rescue a performance poet and his friends from financial ruin whilst simultaneously defending the right to protest and giving an unaccountable energy giant a well-deserved headache, here are a few simple things you can do:

IF YOU HAVE A FEW MINUTES:

- Please share the three things above - the petition, the Facebook and the Twitter
- Watch and share our two videos - this one showing the action itself, and this one explaining how we're being sued.
- Share your favourite media story about us, from the links above
- Leave some messages for EDF on their Facebook page or via Twitter.
- We have reason to believe that EDF's corporate mascot "Zingy" has decided to rebel against its corporate masters in support of us, and so is now being held hostage and forced to dance in EDF's adverts! Show your outrage by joining the "Free Zingy" Facebook page, and demanding Zingy's release here.

IF YOU'RE AN EDF CUSTOMER:

- Please change your supplier (ideally to a green company like Ecotricity or Good Energy) and tell EDF why - preferably in a nice public way on Facebook, Twitter, or at the bottom of the petition. You'll probably be happier for it, because EDF apparently have the worst customer service of all the energy companies.

Thanks everyone - any small thing you can do would be a massive help.

With love and chimney rhymes,

* Protesters in these situations often try to run a "necessity" or "justification" defence - i.e., they admit to blockading a piece of polluting infrastructure, but argue that they were preventing a greater crime, such as the damage caused by CO2 emissions. Unfortunately, it wasn't really feasible for us to run such a defence in this case as we were up in front of a District Judge rather than a jury. As a result, we decided that our time and energy was better spent on other aspects of the campaign, and so we pleaded guilty to get the criminal trial out of the way and get on with other stuff.
Posted by Danny at 12:03