Be Careful What You Wish For

On the day that Environment Secretary Ed Miliband calls for a "popular mobilisation" on climate change...

...57 activists break into Stansted Airport and build a small fort on one of the taxi runways: 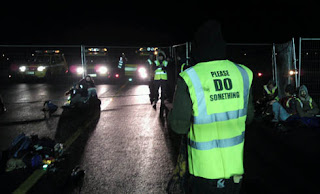 Local Councils initially refused to allow Stansted to expand but - in a fine example of democracy in action - this was overruled by the Government, who are now conducting another dodgy "public enquiry" that will shock no-one when it comes out in favour of a second runway. It now falls to brave activists like these to take action to stop the expansion of Stansted - which would produce an extra 7 million tonnes of CO2 per year, according to the British Airports Authority - and to make the wider point about aviation and climate change.

Stansted are now saying that 56 flights have been cancelled, all from Ryanair. Assuming that half of these were inbound flights (which will have been redirected to other airports), that's 28 flights that didn't happen. Let's do a rough calculation (I'll try to do a better one if I find some better data). The average Stansted flight generates 15.4 tonnes of CO2, according to the Aviation Environment Federation. To get the full climate change impact of burning jet fuel in the upper atmosphere, we need to multiply this by 1.3, meaning that today's protest directly prevented approximately 28 x 15.4 x 1.3 = 561 tonnes of carbon dioxide equivalent. That's the same as the annual greenhouse gas emissions from about 93 UK homes (in terms of electricity and gas use).

That's clearly completely awesome in and of itself. But the protest has also been headline news on all the TV, radio and online news outlets all morning. These 57 people have not only saved more carbon in 5 hours than a typical local authority home insulation scheme would achieve in a year, they also got far more media coverage for climate issues than the thousands of people who marched through London on Saturday.

But of course, illegal direct action doesn't work and those 57 people would have achieved far more by writing stern letters to their MPs.

Meanwhile, news is also breaking that Kingsnorth coal-fired power station in Kent was invaded by mystery intruders last Friday, who got into a control room and shut down one of the turbines for four hours. E.ON, the owners of Kingsnorth, haven't released any more details as yet but it's interesting to note that this took place during the Climate Camp's 48 hours of action against E.ON and new coal. Let's have some more fun with the numbers: according to the Times, 500 MW of generating capacity was lost for four hours. That's 2000 MWh of electricity. Coal-powered electricity generates about 1 tonne of CO2e per MWh, so that's a saving of 2,000 tonnes from shutting down a quarter of Kingsnorth for four hours. Of course, that capacity will have been replaced by firing up a back-up generator elsewhere on the National Grid, but even an inefficient oil generator will only have produced about 1,000 tonnes of CO2e, leaving a clear 1,000 tonne saving. That's the equivalent of 5,000 households switching to energy-saving light bulbs for a year. (Let me know if you want references for all these figures and I'll happily fish them out). Equally importantly, it's kept the spotlight on E.ON and their disgraceful coal expansion plans.

These are the kinds of peaceful direct actions that, as Ed Miliband notes, have been successful at creating social change in "all the big historic movements, from the suffragettes, to anti-apartheid, to sexual equality in the 1960s". If we want a meaningful deal at Copenhagen next year, we're going to need a lot more of this sort of thing, to urgently shove the whole political debate away from the current disastrous "growth at all costs" model and towards climate sanity. So presumably Mr Miliband will now declare his support for today's direct actions, and call for more of the same?
Posted by Danny at 02:38